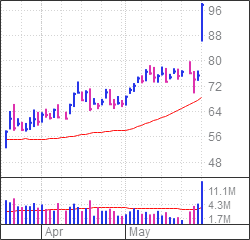 Zscaler is the IBD Stock of the Day amid the cybersecurity firm’s surge on stellar fiscal third-quarter earnings. Zscaler stock soared to an all-time high on Friday after earnings handily beat expectations.


The company’s earnings, reported late Thursday, trounced estimates. With Friday’s pop, Zscaler stock is extended from a proper entry point. Investors may want to put Zscaler stock on a watchlist and look for a new base to form.

Zscaler stock soared 29.4% to close at 98.09 on the stock market today. In the process, it formed a breakaway earnings gap.

Zscaler’s Relative Strength Rating improved in early March after the company noted in a blog that the corporate shift to work-at-home arrangements was boosting demand for its computer security products.

While Zscaler stock rallied in March, shares consolidated ahead of earnings. Some analysts cited its lofty valuation as a multiple of estimated forward revenue.

Also, a big question has been how easily companies could switch to Zscaler’s product amid the Covid-19 pandemic.

As more employees worked from home amid the coronavirus pandemic, many companies upgraded virtual private networks, or VPNs. Zscaler gave them another option, with its cloud-based service.

“ZPA usage grew 10 times during the quarter and accounted for about 43% of new and add-on business, more than doubling from 20% in the first half of fiscal 2020 as ZPA added ‘hundreds of thousands’ of new users,” Cowen analyst Nick Yako said in a report to clients.

Yako added: “Despite the surge in ZPA demand, ample runway remains as only 32% of Zscaler’s Global 2000 customers have purchased ZPA to date.”

Surge In ZPA Use Among Clients

ZPA ensures authorized users can access their private business applications through the cloud without ever connecting to a corporate network,” Zscaler spokesperson Tom Stilwell told IBD in an email.

“This dramatically reduces the attack surface while also delivering a great user experience, both of which are significant issues with legacy solutions like VPNs.”

Aside from the new ZPA product, Zscaler is the biggest provider of web security gateways that inspect customers’ data traffic for malware.

Previous High Was In July 2019

The stock then broke down in the back half of 2019. Analysts cited increased competition with bigger rival Palo Alto Networks (PANW) as well as sales staff turnover.

Heading into the earnings report, shares were already trading above an entry point of 66.60. With its big move in high volume, Zscaler stock bears watching. But, it’s extended for now.

Find Compelling Growth Stocks With IBD’s Stock Of The Day

Get A Free Trial Of IBD Leaderboard