Digi-Capital’s virtual and augmented reality forecast is for global revenue to grow from over $13 billion this year to more than $67 billion by 2024. Yet today’s market is still evolving beyond its early stage of offering related point solutions to specific problems, to becoming a fully functioning ecosystem in its own right. Different parts of the market are moving at different rates, with many shifting pieces to the puzzle.

Let’s look at where we are today with consumer AR/VR markets, not enterprise.

For platforms to be platforms, they need active users. Lots of them. Table stakes are tens of millions, and hundreds of millions are better — but billions are the ultimate goal. For comparison, most of us are active users of the biggest consumer platform on the planet: mobile. According to Ericsson, mobile now has as many subscriptions as there are people on the planet. 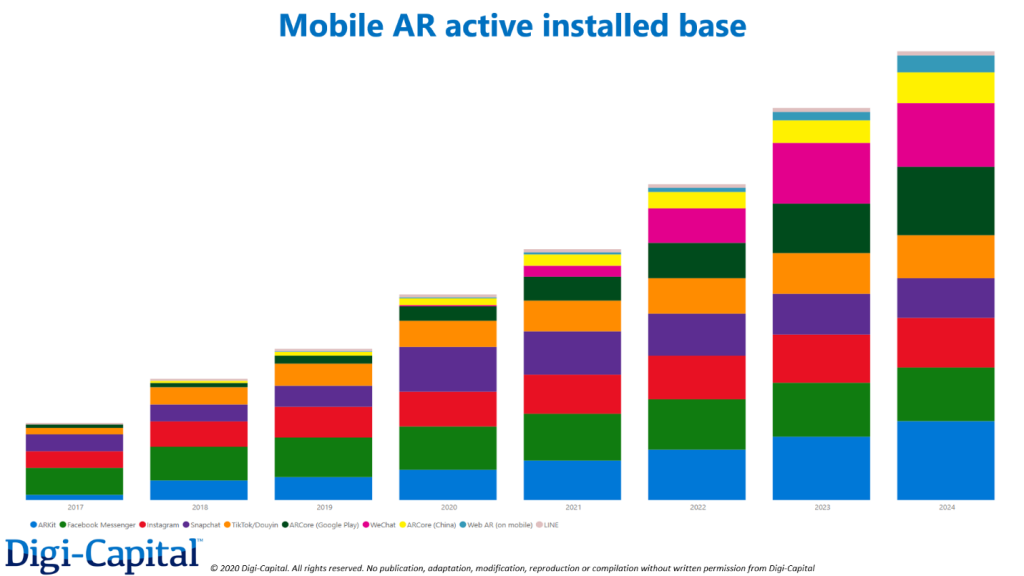 Mobile AR can now claim to be a consumer platform, with Digi-Capital forecasting over 1 billion active installed base across messaging-based, OS-based, and web-based mobile AR platforms in 2020. For example, ByteDance’s TikTok use grew 130% in the first week of March for a weekly total over 3 billion hours due to both higher user numbers and average time per session. This was a significant factor in TikTok owner ByteDance (also owner of Chinese messaging platform Douyin) being reported by Reuters to have 130% revenue growth to $5.6 billion in Q1 2020. However, ByteDance is now dealing with different challenges across several fronts.

VR has different user dynamics, partly because of a lack of plurality, but mainly due to user attrition. One of the challenges for VR is a primary entertainment focus (games, video), which despite its immersion can be done more easily and cheaply on existing devices. Also the social side of VR hasn’t scaled – even Facebook announced it was starting again from scratch with a totally new social VR platform late last year. When describing ambitions for Facebook Horizon, CEO Mark Zuckerberg said “Horizon is going to have this property where it just expands and gets better.” Yet scale remains a question. While there is a dedicated core of active VR users, there aren’t enough casual users to scale VR as a platform yet.

If Apple launches smartphone-tethered smartglasses as an iPhone peripheral in late 2022, as Digi-Capital forecasts, we’ll get a better idea of what consumer smartglasses Daily Active Users (DAU) could look like. But as we’ve said many times, only Tim Cook and his inner circle really know if and when Apple’s going to enter. Magic Leap pivoted away from the consumer market, with former CEO Rony Abovitz saying, “While our leadership team, board, and investors still believe in the long-term potential of our IP, the near-term revenue opportunities are currently concentrated on the enterprise side”. It’s also early days for consumer smartglasses startups like nReal, despite CEO Chi Xu describing it as a “cell phone companion” taking a different approach to Google Glass, HoloLens and Magic Leap. Similarly, Snap Spectacles (not smartglasses) and Google Glass highlighted some of the consumer challenges for high tech goggles.

The most important economic lesson from mobile is “Frequency ∝ Revenue” (“∝” means “proportional to”). In other words, high user frequency = money. For example, top 1% grossing mobile apps deliver 35 times the sessions per day of top 5% apps. And going back to active users, lifetime value of top 1% grossing apps is 20 times that of the top 5%. While it’s obvious, you need to hold on to users and give them something they want to do every day to make money. There are big differences between AR/VR and mobile, but this remains a crucial dynamic.

Mobile AR has shown what is possible for major AR enabled messaging platforms, with Facebook Messenger, Instagram, TikTok and Snapchat as standouts. While each has a different approach to user engagement, usage frequency for AR lenses/filters is high, with Snapchat reporting AR features used by three quarters of its users on a daily basis. Snap CEO Evan Spiegel said, “There’s a lot of demand right now from businesses to think about different ways to try things on. People have been excited about the potential for this for a long time.”

Mobile AR is a big part of why messaging platforms are so valuable, driving massive user generated content consumption against which to sell advertising. It’s worth noting that a lot of this ad spend is going toward traditional ad units viewed around user generated mobile AR content (i.e., filters and lenses on messaging platforms), rather than just mobile AR ad units. This does not mean that sponsored mobile AR filters and lenses are not a significant part of the mix going forward. Pokémon Go has also delivered high usage frequency.

Many VR headsets get used by consumers less than once a day, with a significant proportion every few days, weekly, or even monthly. Our User Strategy team’s product/market fit reviews for startups have consistently shown this dynamic even when users love their VR apps. The words “evenings”, “weekends” and “holidays” come up frequently, particular for under-34 Snapchat demographic users. Not great for frequency.

Again with smartglasses it is too early to tell, but app developers might need a mental model closer to mobile than enterprise to get frequency to work. Lightweight, short duration apps that are opened tens to hundreds of times a day could keep smartglasses on peoples’ faces when they’re ready for prime time. No pressure there, then.

We think about use cases for new technology platforms in terms of valuable versus critical. Valuable use cases might be cool and technically hard to do, but either don’t fundamentally transform user experience or aren’t important to users. Critical use cases enable lots of users to do something they really care about, and that couldn’t be done in any other way. Critical is interesting, but valuable? Not so much.

One critical use case has emerged for mobile AR – AR filters/lenses in mobile messaging apps. Snap said in June that “170 million Snapchatters engage with AR daily – nearly 30 times every day”, so it’s easy to see how mobile AR has become part of the core user loop for a significant proportion of messaging users. Pokémon Go is also notable, but might be considered an outlier due to its singular scale in the mobile AR games space.

VR is cool, technically hard to do, and can take you to other worlds. But critical? VR’s entertainment focus effectively makes it a subset of the games market for consumers, as evidenced by the majority of top VR apps on Steam, Facebook/Oculus and Sony app stores (as well as enterprise use cases promoted by HTC and others). Beyond games, a critical consumer use case hasn’t emerged for VR since Facebook acquired Oculus 6 years ago. For comparison, Uber launched three years after the iPhone.

As smartglasses are largely enterprise-focused today, again it’s early for critical consumer use cases. The first could evolve from mobile AR, but they are more likely to come from native smartglasses use cases that only work for that form-factor. 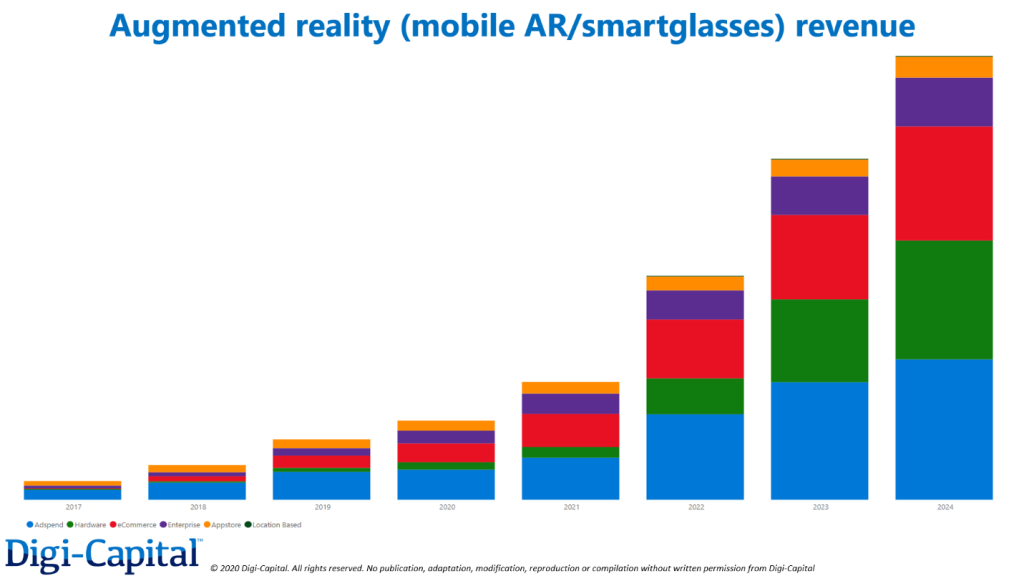 Mobile consumers spend an average of 90% of their phone time in apps (versus 10% for web), tend to use just 10 mobile apps regularly, and spend over three quarters of that time in their top three apps. A majority of users download zero apps per month too. This means critical use cases are not enough. They need to be features of critical apps we use all the time already, or something so insanely great that we might actually download it.

This dynamic has proven to be mobile AR’s secret weapon, with messaging as the critical app for mobile AR. The huge success of Pokémon Go came from a specific set of circumstances that are hard to replicate, and Live View in Google Maps remains a promising AR functionality. Houzz CEO Adi Tatarko has discussed how its mobile AR features drive an extraordinary 11-times sales uplift for ecommerce as a feature of an already successful app, saying that “we’re very proud as a technology company that we can always be in front of the best technologies and apply them very deeply into our own industry.” So mobile incumbents might have a disproportionate impact on mobile AR’s ecosystem compared to startup insurgents.

The challenges for critical VR use cases apply to critical VR apps too. It’s hard to describe a VR app you couldn’t live without, even if you love Facebook’s Beat Saber. It’s too early to tell with smartglasses again, but their critical use cases might need to be more than ports from breakout mobile AR successes.

Many people in the augmented reality industry are excited about AR Cloud, a persistent 3D real-world data layer for shared AR apps. Apple, Google, Niantic and others are positioning for the future of the technology, and it could become a key enabler for the ecosystem for both mobile AR and smartglasses. Yet critical use cases and monetization remain open questions, and even Niantic CEO John Hanke has been quoted as saying that, “AR in and of itself is not a magic bullet for a hit…there are some real drawbacks to it.” Google and Uber are proof that platform economics can take time to hit their stride, so the excitement may yet be warranted. High Fidelity CEO Philip Rosedale explored blockchain early on as a “generalized digital asset registry”, but the company pivoted away from its original social VR platform before that approach caught on.

For the Consumer AR/VR Ecosystem to succeed, massive installed bases for underlying hardware and software platforms are required. While this does not guarantee users downloading or using AR/VR apps, without them there’s little chance of success.

Today’s critical hardware is the smartphone. It’s the first, most frequent, and last thing most of us look at every day. So mobile AR has critical hardware already. And if we’re right about Apple adding rear-facing depth sensors to the iPhone this year, functionality could get better for a broader set of users. Fast Company recently reported a “source with knowledge” as confirming our thinking, so we’ll all know whether or not this happens later in the year.

VR hardware is valuable, but its usage patterns don’t make it look critical yet. So despite the relative success of Facebook’s Oculus Quest and Sony’s PSVR, VR seems to have found a deep niche audience without going mass-market.

Smartglasses need an Apple quality device (whether made by Apple or somebody else) to be critical. They could start out as mobile peripherals, but a device capable of replacing your phone might be what’s needed to truly scale. However there are major technical issues to solve first, so this could take a few years. 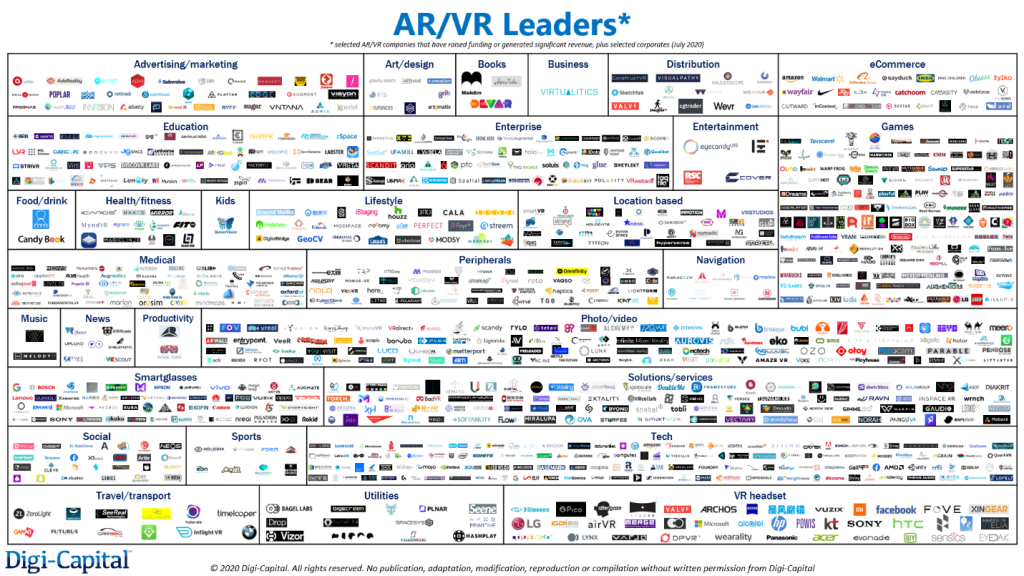 Mobile AR’s consumer leaders are primarily major messaging platform holders like Facebook, ByteDance, and Snap, as well as OS based mobile AR holders Apple and Google. Niantic is also a mobile AR market leader, but has yet to evolve at scale beyond hit game Pokémon Go. Consumer VR has the usual suspects of Facebook, Sony, HTC, and Valve, but their leadership is limited by VR market scale so far. Apple stands out as a potential consumer smartglasses hero, but the company hasn’t talked about product, let alone launched anything yet.

Are we there yet?

Mobile AR is AR/VR’s fully functioning ecosystem today, albeit in a specific vertical built on mobile messaging platforms (again, Pokémon Go looks more like an outlier so far). It will be fascinating to see how messaging incumbents build out from their beachheads, and how effectively they layer ecommerce on top of today’s largely ad-driven business model.

VR appears challenged at the ecosystem level at this stage of the market, with no clear catalyst on the horizon despite steady growth. And while the consumer smartglasses market doesn’t really exist yet, Cook and friends could change everything if and when they decide it’s time for one more thing. It’s not like they haven’t done it before.

Sony Patent Hints at What the PS5 UI Could Look Like