Tesla Inc (NASDAQ: TSLA) and SpaceX have CEO Elon Musk in common…and that’s just about it. But are some traders using Tesla’s stock as a vehicle to trade or invest in Musk’s privately-owned space exploration company?

“In the past, Tesla shares have traded around SpaceX launches,” Baird analyst Ben Kallo wrote in a May 27 note. “Importantly, the SpaceX launches were a larger driver of share performance earlier in Tesla’s history, when the company’s status as a disruptor and growth profile was less established.”

Below is a chart, courtesy of Baird, highlighting the moves in Tesla’s stock during notable SpaceX events: 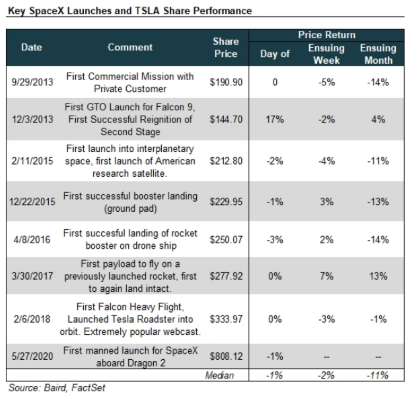 The trend around Tesla’s stock price related to SpaceX launches apparently still continues even as the company cements itself as a serious player in the auto space and as SpaceX continues to make history as a space exploration company.

Wow, $TSLA traded down $5 on the launch postponement– there are actually dummies who bought the stock today based on that completely unrelated event… Amazing!

See Also: What To Know About NASA And SpaceX’s Crew Dragon Launch

Mark Spiegel of Stanphyl Capital elaborated on his thoughts as to why SpaceX events shouldn’t impact Tesla’s stock price.

“Seeing as there’s no meaningful financial connection whatsoever between the business of Tesla and the business of SpaceX (other than what Musk might happen to steal from one to the other), there should be no reaction in $TSLA stock regardless of what happens with the launch,” Spiegel told Benzinga.

When asked if people are trading Tesla in correlation with SpaceX, Ivan Feinseth of Tigress Financial Partners told Benzinga, “I can’t see any correlation other than that they are run by the same guy.”

It seems as if the interest around SpaceX is taking off, and some traders are itching to find ways to invest in the company even though it’s privately owned, and are resorting to Tesla’s stock.

On Saturday afternoon, the SpaceX Falcon 9 is scheduled to launch the Crew Dragon with two NASA astronauts on board.

Do you agree with this take? Email feedback@benzinga.com with your thoughts.

Photo by Steve Jurvetson via Wikimedia.

© 2020 Benzinga.com. Benzinga does not provide investment advice. All rights reserved.

37% of Baby Boomers Have This Dangerous Belief About Retirement