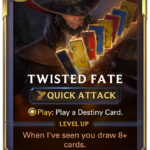 Legends of Runeterra’s card reveal continues to surprise fans of the card game, showing off a new champion from Bilgewater.

Twisted Fate is the next champion that Riot revealed in today’s teasers. He’s a four-cost champion unit with two power and two health with Quick Attack. He also has a play effect, which lets you pick one of three Destiny Cards to act as his skill, in similar fashion to Discover from Hearthstone. He levels up when he sees you draw eight or more cards.

Twisted Fate’s leveled-up form is also four-cost and gains +1/+1 in stats while retaining his Quick Attack keyword. Twisted Fate also plays a Destiny Card the first three times the user plays a card during each round.

At first glance, Twisted Fate is very weak stat-distribution wise. But his power comes from playing Destiny Cards and giving you the chance to gain card advantage. Choosing the proper Destiny cards to bolster your strategies is key to succeeding with and leveling up Twisted Fate as soon as possible, since the opportunity to play these Destiny Cards becomes threefold once he levels up.

Blue Card helps enable combos by drawing you a card and refilling one spell mana, giving potential to draw more cards in the future. Red Card allows you to potentially clear boards by dealing one damage to every enemy unit alongside their nexus. This can be an especially dangerous combination with the Powder Kegs recently revealed earlier today. Yellow Card deals two damage to the strongest enemy and stuns it, allowing you to catch up on board easier.

Twisted Fate will join the champion roster when LoR is officially released for PC and mobile on April 30.

Raze has the lowest win rate in almost every VALORANT division