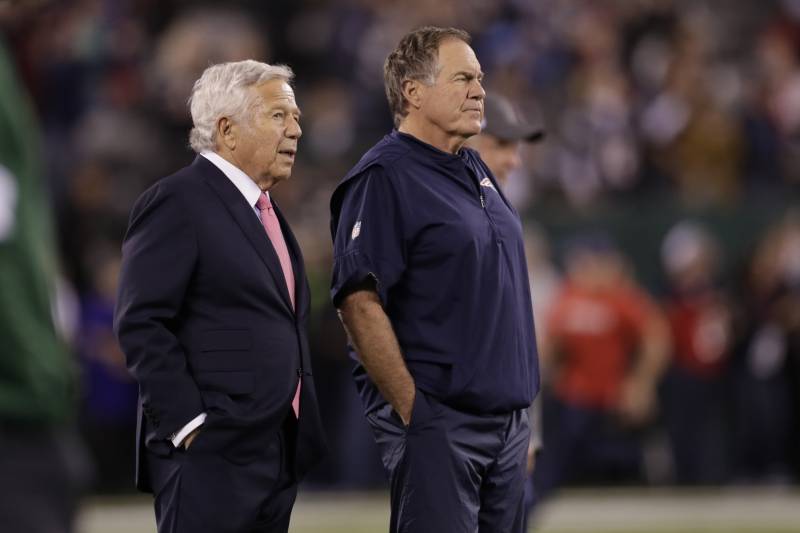 The New England Patriots received $1.1 million in fines from the NFL and forfeited a 2021 third-round pick Sunday after they acknowledged in December that a member of the production crew working for the team’s website filmed the Cincinnati Bengals sideline during their Week 14 game against the Cleveland Browns.

ESPN’s Mike Reiss laid out the full punishment from the league:

Developing news story: The NFL has handed down the following penalties to the Patriots for their television crew filming the field and Cincinnati sideline during a December game between the Bengals and Browns, per sources: https://t.co/Co8kvuofR6

New England faced the Bengals in Week 15, but Pats head coach Bill Belichick was adamant the coaching staff didn’t request or utilize the video in question ahead of the game.

“I have no involvement in this and no knowledge of it. I really don’t have any idea what exactly is going on,” he said Dec. 10. “I can tell you that we’ve never, as a coaching staff, and I’ve personally never used any video footage at all of anything that those production people have done, other than what’s shown on public television or something like that.”

The Patriots organization also released a statement attempting to clarify the situation:

Jay Glazer of Fox Sports obtained video of a confrontation between a Bengals staffer and the videographer working for New England, which also included part of the sideline footage:

The Patriots went on to a score a 34-13 victory over the Bengals, who finished the regular season with an NFL-worst 2-14 record.

NFL Commissioner Roger Goodell addressed the status of the investigation during his press conference ahead of Super Bowl LIV between the Kansas City Chiefs and San Francisco 49ers:

“From our standpoint, we want to make sure we are being thorough. Our team has been on it. We have been focused on this. It has not been that lengthy of a time. We have obviously put our focus on it, but we’re going to get it right. When we come to a conclusion, we’ll certainly make sure people are aware of it.”

It’s the third high-profile punishment handed down to New England and members of the organization during its dynastic run of six Super Bowl championships since 2001.

In Spygate, Belichick was fined $500,000, the Patriots were fined $250,000, and the team lost its first-round pick in the 2008 NFL draft for illegally filming coaching signals from an unauthorized location during a victory over the New York Jets in Week 1 of the 2007 season.

In 2015, Pats quarterback Tom Brady was suspended four games and the team was fined $1 million and lost two draft picks (a 2016 first-rounder and a 2017 fourth-rounder) for Deflategate—the allegedly deliberate deflation of footballs during the 2014 AFC Championship Game against the Indianapolis Colts.

New England’s 2019 season and its latest title defense came to a close with a 20-13 loss to the Tennessee Titans in the Wild Card Round.