Legends of Runeterra fans were treated to the reveal of the final new champion entering the Bilgewater region today.

Miss Fortune is the last champion that will be joining the LoR roster for the game’s official release. She’s a three-cost champion unit with three power and health. She also has an ability where when you attack with Miss Fortune on the field, she deals one damage to every defending enemy unit and the enemy Nexus. She reaches her leveled form when she sees you attack four times. 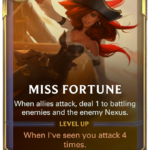 Miss Fortune’s leveled form is also three-cost with +1/+1 in stats and she gains Overwhelm. Her ability improves, dealing one damage to defending enemy units and the Nexus three times instead of just once compared to the base form.

Miss Fortune is a quintessential, all-around aggressive unit. Similar to other early three drop champions, like Zed or Draven, Miss Fortune serves as both an enabler and a standalone good unit. She can help Sejuani and Gangplank reach their leveled-up forms or activate Plunder by dealing guaranteed damage to the enemy Nexus whenever she attacks. She can help wide token-based boards like enemy Spiders or Jury-Rigs. While she may not have the evasiveness of other early champions, like Elise’s Fearsome or Zed/Draven’s Quick Attack, she’s still just as potent as them if the opponent is unable to answer her quickly.

Unlike Anivia, her ability doesn’t even require you to attack with Miss Fortune to proc it. As long as she’s on the field, you get the free AoE as long as you have other units to declare battle with. If Miss Fortune can’t swing safely into an opposing board, she still activates her ability.

While it’s unlikely for her to reach her leveled state, the drastic jump in power from level one to two is extreme in parity, similar to Draven. Once she’s leveled, you should end the game quickly since she obtains an even better Anivia skill. It even scales more with spell amplification effects, like the newly-revealed Powder Kegs.

Miss Fortune will join the champion roster when LoR is officially released for PC and mobile on April 30.