Looters cause damage in Emeryville

Looters who do not appear to be associated with the George Floyd protests raged through Emeryville Saturday night, stealing items from Best Buy and from retail outlets on Bay Streets, breaking windows to get inside, according to video taken at the scene and shared on social media.

EMERYVILLE, Calif. – Violent protests raged on Saturday night over the death of George Floyd, prompting the mayor of San Francisco to issue an immediate curfew and police in riot gear to come out in force to protect vandalized shops in Emeryville. In Los Angeles, the protests got so out of hand that Gov. Gavin Newsom issued a state of emergency.

For a second night, police in Oakland tired to break up large crowds of people by declaring the gathering unlawful. Witnesses said that tear gas had also been unleashed.

At a late-night news conference, San Francisco Police Chief Bill Scott said that while there were several hours of peaceful protests beginning at noon on Saturday, when nightfall came, some people started damaging police cars and assaulting officers, aside from breaking windows in Union Square.

That prompted Mayor London Breed to issue an 8 p.m. to 5 a.m. curfew.  The National Guard is on standby, she said.

As an African-American woman, Breed said she understands all the anger and hurt over the senseless death of George Floyd in Minneapolis because a white police officer kneeled on his neck, snuffing out his life, all of which was captured on cell phone video and shared around the world. The officer has since been fired and charged with murder.

However, she said, she won’t stand for physical harm.

“What we are seeing tonight, the violence, the vandalism and the crimes being committed in our city, not against property but against other people, that is something that we will not tolerate.”

Meanwhile, across the bay, looters raged through Emeryville Saturday night, stealing items from Best Buy and from retail outlets on Bay Streets, breaking windows to get inside, according to video taken at the scene and shared on social media.

Glass was shattered and merchandise was taken from the many stores that flank Bay Street outdoor shopping center and nearby Powell Street. Starbucks, BevMo, Best Buy, Marshalls, Urban Outfitters and the Men’s Warehouse all were just some of the targets of vandalism and thefts. From people’s tweets, it seems as though the looting began around 7 p.m. Many of these stores had recently opened for curbside pickup.

About 10 p.m. a witness watched as police lined up around the Public Market Emeryville to protect the shops there. SkyFox flew overhead, showing at least one man being detained on the curb by police. An official number of arrests was not immediately available.

There was also a large group of protesters in downtown Oakland on Saturday night. Police urged the crowd to disperse after declaring there was an unlawful assembly. Police said they had made arrests for a shooting that harmed no one and looting.

“We will not tolerate violence or destruction in our valued and vulnerable city,” the department posted on Twitter.

On Friday, shops were vandalized and looted. A federal officer was killed and another wounded in a shooting that has been labeled an act of terrorism by federal authorities.

In a message to Emeryville citizens, Police Chief Jennifer Tejada urged people to continue the shelter-in-place order because of the coronavirus pandemic. 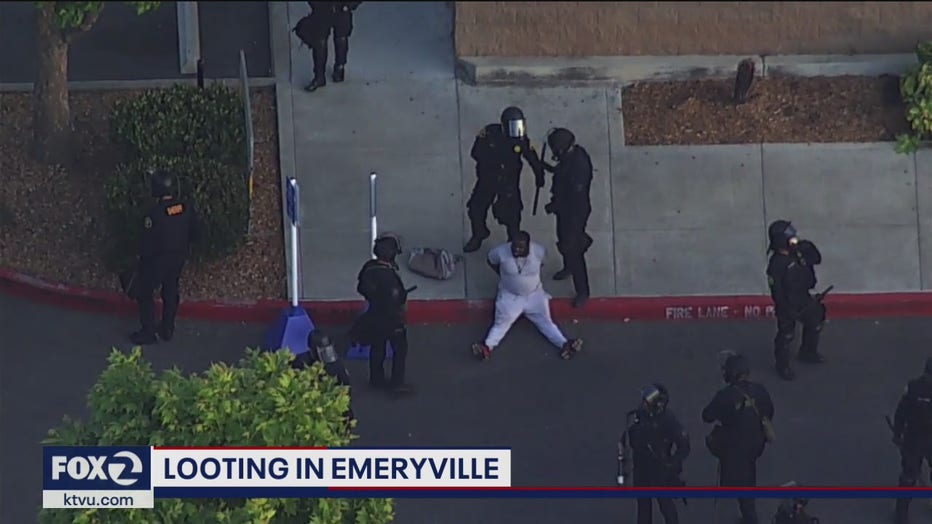 In Emeryville, city councilman John Bauters said that it did not appear to him that the looters in Emeryville were not affiliated with any sanctioned George Floyd protest.

In an interview with KTVU, Bauters, who lives in the neighborhood where the looting was going on, said from his vantage point, he said the young people breaking windows were not part of any organized group, had no call to action and offered no “set of action steps or demands.”

Bauters, who works in criminal justice reform, said that while he is certainly not pro-looting, he understands were the anger at “commercial culture” is coming from.

“Am I for looting? No,” Bauters said. “But who cares about the Target right now when there is a lack of police accountability in this country. When are we going to prioritize that?”

He also wanted to share this message with members of the public who let the looting take precedence over what is much more important than some TVs being stolen.

“It would be a disservice to the activists and advocates who have done incredible work on racial justice and to associate what they have done with the actions some young people taking their justifiable outrage and using it to their advantage. The looting is just a distraction.”

Mayor Christian Patz said that he also understands the anger in the community and at the same time, he commended his police department for their restraint.

Not all protests in the country turned violent.

In Santa Cruz, the police chief on Saturday took a knee, just as former 49ers Colin Kaepernick, to show solidarity for African Americans who suffered police brutality and racism.

Police protect stores at Bay Street after looters break windows and steal. May 29, 2020

KTVU’s Stacey Rikard and Cristina Rendon contributed to this report.

Nasdaq May Fall as Valuation Stretched Close To “Bubble” Level