JetBlue Airways Corp on Monday became the first major U.S. airline to order customers to wear face coverings while traveling in an effort to curb the spread of the novel coronavirus.

The new policy follows guidelines by the U.S. Centers for Disease Control that all individuals should wear a face covering in public.

Starting May 4 all JetBlue customers will be required to wear a face covering over their nose and mouth throughout their journey, including during check-in, boarding, while in flight and deplaning, the low-cost carrier said in a statement. 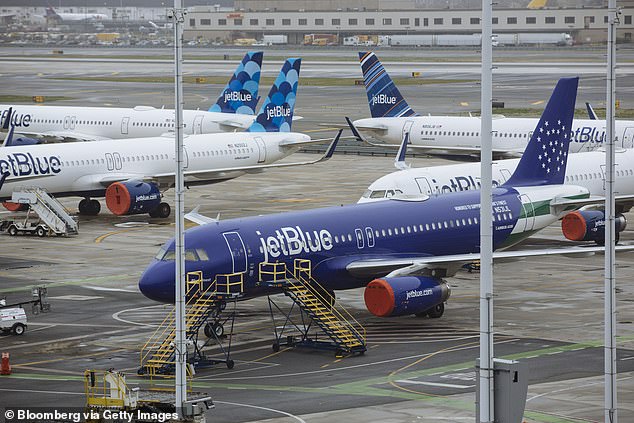 JetBlue Airways Corp on Monday became the first major U.S. airline to order customers to wear face coverings while traveling in an effort to curb the spread of the novel coronavirus

‘Wearing a face covering isn’t about protecting yourself it’s about protecting those around you,’ said Joanna Geraghty, president and chief operating officer, JetBlue. ‘This is the new flying etiquette. Onboard, cabin air is well circulated and cleaned through filters every few minutes but this is a shared space where we have to be considerate of others.

‘We are also asking our customers to follow these CDC guidelines in the airport as well.’

The company said that since late March, it has limited the number of seats available for sale on most flights, allowing the airline to provide additional space between individuals who are not traveling together.

JetBlue started mandating face masks for flight attendants as well as other crewmembers including airport workers on April 17.

Earlier this month, it was reported that JetBlue flight attendant Ray Pabon, 51, had died from coronavirus.

Pabon, who had diabetes, died on April 13 after becoming unwell a month earlier.

Before Pabin passed away, two staff members had died from COVID-19.

Tyson Managers Bet on Employees Catching COVID-19 According to Lawsuit