Apex Legends’ fifth season started earlier in May with tons of adjustments to popular weapons and a new legend named Loba.

Though the buff and nerfs that came with the new season shook up the gun meta of the game, it looks like the nerfs to the most popular legends and the buffs to weaker ones weren’t enough to balance the pick rates of legends more evenly. 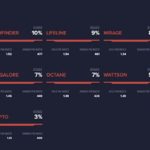 Wraith still comfortably sits on the top spot with 27-percent popularity despite being hit by the Low Profile perk that increases the damage she takes by five percent in 2019. Pathfinder secured the second spot with a 10-percent pick rate after receiving a crucial nerf that increased his Grappling Hook’s Damage by 20 seconds. Before the changes Pathfinder, was closer to Wraith with a 22-percent pick rate.

There seems to be almost three times the difference between Wraith and Pathfinder now in terms of popularity, which looks concerning considering the competition is more fierce between the rest of the legends.

Buffs to Caustic and Octane were also enough to keep these legends high in the rankings. The significant buffs to Mirage weren’t enough to allow him to dethrone Lifeline, however. Mirage was already a popular legend but the changes he received that made him more versatile and deadlier in the right hands seemed to have a smaller impact on his pick rate than expected.

Loba’s yet to be featured in the statistics, since there isn’t enough data. Revenant and Crypto, two of the latest legends to join Apex, are at the bottom of the barrel with four and three percent pick-ratios respectively.

While the fifth season could be considered statistically unsuccessful in terms of bringing more diversity to legend preferences of the players, it surely brought a lot to ignite the game’s competitive spirit. Shortly after the start of the season, EA and Respawn announced their plans regarding the competitive future of Apex.

The cycle starts with the Apex Legends Global series Summer Circuit which already features the top six teams around the world that earned their spots via Apex’s online tournaments. The players who are ranked above Gold IV on PC will also have a chance to join the open qualifiers with their squads for a spot in the playoffs, which are scheduled to start on September 12.