Raleigh, N.C. — ReopenNC will be back in downtown Raleigh on Tuesday to protest the gradual reopening of North Carolina.

The group is expected to meet at the Legislative building at 11 a.m. They have gathered downtown each Tuesday for four weeks in a row. 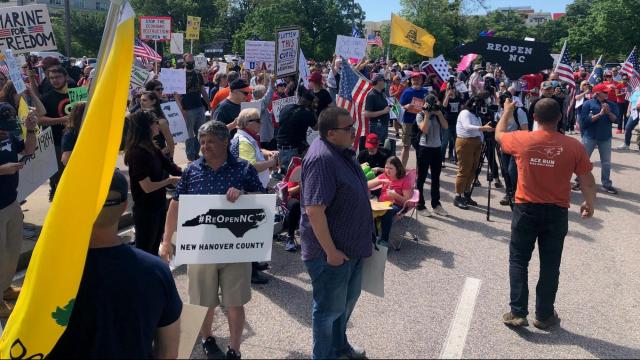 On May 8, North Carolina entered phase 1 of a three-step plan to reopen the state. The plan keeps dining rooms, spas and salons and larger venues like churches and movie theaters closed until at least May 22, when they can reopen at 50% capacity. ReopenNC organizers say they aren’t happy with the phased reopening plan and they want Gov. Roy Cooper to immediately lift his statewide stay-at-home order.

The three phases and what they mean

A man plans to counter protest ReopenNC on Tuesday with a plane carrying a banner that reads, “Fewer graves if we reopen in waves #ScienceSaves.” The man who organized the flyover said he is at risk of getting coronavirus.

Over the past several week, others have shown up to send the same counter message, including some healthcare workers who stood in silence, wearing masks and gowns, to make a statement.

About 200 people turned out for the most recent ReopenNC protest, held on May 5, but previous rallies led to arrests.

What if ‘Herd Immunity’ Is Closer Than Scientists Thought?