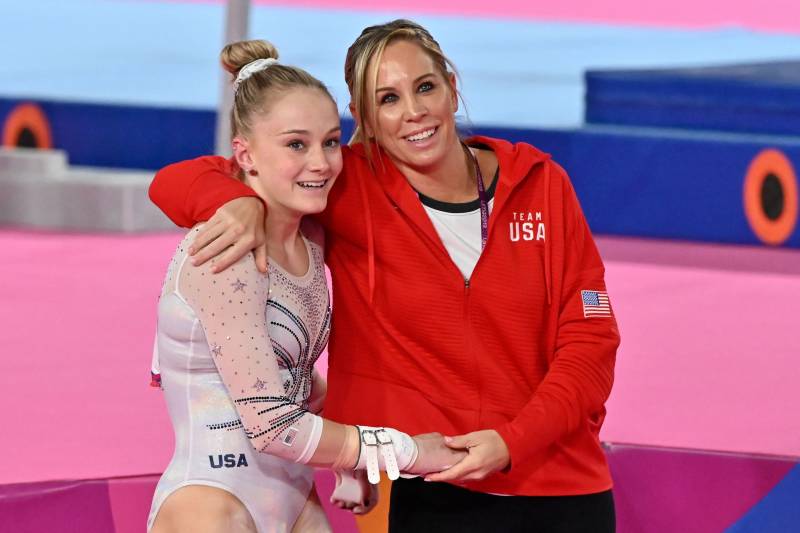 USA Gymnastics outlined the remainder of the punishment:

“The hearing panel determined that Ms. Haney is suspended from membership, and any coaching of USA Gymnastics athletes or in member clubs, for a period of eight years, effective immediately, followed by a two year probationary period. After the suspension concludes, Ms. Haney may reapply for membership after submitting proof of completing certain specified Safe Sport courses.”

A USA Gymnastics hearing panel wrote that Haney failed “to provide a safe, positive and healthy environment with a culture of trust and empowerment.” They further ruled that Haney “engaged in severe aggressive behavior toward a minor that included teasing and ridiculing that was intended to control and diminish another person.”

Per Reid, two months of hearings regarding Haney occurred. Hernandez testified against Haney, and McCusker wrote the panel a letter criticizing her ex-coach.

Haney, who has not responded to comment requests from the Orange Country Register, is expected to appeal. Her attorney, Russell Prince, released the following remarks:

“The ruling is regrettable but in no way surprising considering the heavy-handed nature of the investigative and hearing process. There is no fundamental fairness to the manner in which these matters are resolved. Clearly, I would anticipate an arbitration.”

Julie Sanders, an attorney for Hernandez and others, stated that the ruling reveals “that these are children, even if they’re an elite athlete and the coach doesn’t possess the athlete, they’re not something to be controlled by the coach.”

Haney is the head coach at MG Elite Gymnastics in Monmouth Junction, New Jersey, where she coached both Hernandez and McCusker.

In addition, the spotlight on USA Gymnastics has elicited concerns about coaches over the past three decades, with Reid writing the following:

“The Haney case raised further questions about a generation of American coaches that came of age in the so called Karolyi Era, a period through the late 1990s to 2016 that saw both unprecedented U.S. Olympic and World Championships success under national team directors Bela and Martha Karolyi and the creation of a culture abuse that left young gymnasts vulnerable to predatory coaches, physicians and officials.”

Intense scrutiny on the USA Gymnastics program has also occurred largely because of former team doctor Larry Nassar, who pled guilty to seven counts of first-degree criminal sexual conduct with children under the age of 16. Over 150 women and girls testified against Nassar in court.

Survivors are suing USA Gymnastics, and gymnasts such as gold medalists Simone Biles and Aly Raisman have demanded an independent investigation exploring why Nassar’s acts could occur within the organization.