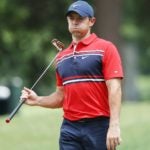 Rory McIlroy is always graded on a scale, so his T11 was a bit of a disappointment at the Travelers.

It was a turbulent week at the Travelers Championship. Things happen crazy-fast these days, so it would be understandable if you’ve already forgotten that less than 24 hours before the event began two of the top five golfers in the world withdrew due to positive coronavirus tests from people close to them. After that, a good ol’ golf tournament played out. How’d it go? Let’s break it down.

I dunno what to tell you about Dustin Johnson. The guy can look lethargic and he can look withdrawn and he can go most of two years with just one win and yet when you see that name at the top of the leaderboard, it feels wholly inevitable. When Dustin Johnson wins, it feels like he should always be winning.

Johnson started Sunday two shots back but quickly overtook Brendon Todd, and whenever he needed a prime tee shot to secure things, he delivered, first after pumping one O.B. at 13 and particularly clinging to a one-shot lead on No. 18, where he explored previously unseen territory 350-plus yards down the middle. Ridiculous.

Whenever you’ve done something to inspire Nick Faldo to say “the old shank-a-doodle,” things have definitely not gone according to plan. Todd had 148 yards left from the fairway on No. 12 on Sunday and made 7. Given he had already given up the 54-hole lead, that was…not good. Just one player in the field posted a higher number than Todd’s 75 on Sunday.

(For what it’s worth, that player, Luke Donald, had a sense of humor about it all:)

Credit where credit’s due: the Bermuda–Mayakoba Vacationland Double wasn’t just a fluke. Todd’s got plenty of game and T11 despite a disastrous Sunday includes plenty of positives.

Positives: Fantastic winner (Johnson) coming off a long layoff with some compelling figures and contrasting styles competing in a close event down the stretch. But the late hour-long lightning delay was a serious momentum-killer, and you could tell D.J. would have much preferred to finish this one off with a big make. Nice tournament, but when you compare it with Spieth’s splashy walk-off, the finale fell flat.

The Daniel Summerhays walk-off: A+

We don’t always dabble in the Korn Ferry Tour in this space but we’re still making the rules and c’mon, this story was just too good: Daniel Summerhays, who has had a respectable Tour career, announced that this would be his last week of full-time professional golf. He was making his exit at home this week at the KFT’s Utah Championship and fired a final-round 62 to post an early number and sneak his way into a playoff.

Technically he could have won, so maybe this should be reduced to an A or something, but consider this: He’s leaving golf to become a teacher after this! How many schoolteachers do you know who can go 9 red under pressure? Bonus points because he wasn’t the only Summerhays to break par: his nephew Preston, 17 and playing on a sponsor’s exemption, shot 2-under and narrowly missed the weekend.

(While we’re spending some time with our Korn Ferry pals…) Look, it probably didn’t matter. South African Korn Ferry Tour player Dawie van der Walt needed to birdie the last two holes to get into a playoff with Summerhays and two others. But he could have done better than…this. Sorry, Dawie.

Mackenzie Hughes had a heck of a week. The streaky Canadian fired an opening round of 60, hung on for dear life through Friday, Saturday and most of Sunday and then closed like a champion. He birdied the gettable par-4 15th, added another birdie with a 50-footer on 17 and closed with a 45-footer for birdie from the fringe on 18 to lock in a tie for 3rd and a cool $436,600. Those final two putts netted Hughes over $200,000 and invaluable FedEx Cup points.

But the T3 title really belonged to Will Gordon, who you’d likely never heard of until this week. He’s a heck of a golfer, but so are a lot of other guys. The difference with Gordon is he’s badly in need of some status and likely needed a two-way tie for 3rd in order to earn Special Temporary Membership on the PGA Tour and unlimited sponsor’s exemptions. Well, guess what: Gordon finished in a two-way tie for 3rd.

Confused? We are too, but don’t worry about it — Will Gordon is here to stay thanks to some ridiculously clutch play in central Connecticut. Good on ya, Will.

Finally, this: Gordon mentioned in his post-round interview that playing partner Jon Rahm asked him as they were playing No. 16 what his status was. Good god, Jon! Sounds like the kind of guy who would pull aside a pitcher with a perfect game in the middle of the 8th inning and ask how many hits he’d given up. Gordon overcame it all.

He’s back, sort of. The fact that 50-year-old Phil Mickelson opened up 64-63 served as a reminder that truly anything is possible in this fantastically dumb professional sport. Unfortunately bogeys were like doubles this week, so Mickelson’s matching 71s on the weekend dropped him 23 spots. For some context, 31 players shot in the 60s all four rounds this week. Lefty’s got some fight left in him, but can he keep it together for all four rounds?

Since the PGA Tour’s restart, Bryson DeChambeau is 46 under par in three tournaments. That’s 12 rounds, nearly four shots under par per round. It’s the best number of anyone on Tour, and this week’s T8 was actually the worst finish in his last five starts (T5, 2, 4, T3, T8). Granted, no wins. But this is supposed to be the short-hitter’s stretch. With that in mind, we see Good times ahead for big boy Bryson.

We’re grading on the Rory Scale here, which is wholly unfair — we’ll happily to admit that. This week was decidedly better than McIlroy’s finishes at Colonial (Sunday 74 to finish T32) or RBC (T41) but when the best player in the world fires an opening round of 63, it’s hard not to get your hopes up for something better than a T11.

Don’t just take my word for it, though: Listen to the words used by the man himself. “Frustrating.” “Rollercoaster-ish.” “Dumb mistakes.” You’d never know the guy played some pretty nice golf this week.

The good news is that nothing seems truly amiss in McIlroy’s arsenal. It’ll be all systems go in RoryWorld when he returns at Muirfield Village.

This feels like a particularly harsh grade for a guy who shot in the 60s every day this week. Let’s revisit that — in the 60s! Every day! But Spieth highlights tend to pop up the week of the Travelers every year, and so a T54 just doesn’t sit quite right when the eyes of the golf world are (desperately, hopefully) watching.

Look, I’m as surprised as you are to be writing this after Monahan essentially went with the “everything is fine” reaction to a slew of positive tests on the PGA Tour this week. But the tenuous Tour bubble held firm following his presser on Wednesday, and several players or caddies who had tested positive tested negative shortly thereafter. Tenuous is the key word of this entire paragraph, but there was a moment on Wednesday where it felt like this whole thing might be shutting down. Thus far, it feels like a good call that the commish stayed the course.

Finally, a thought for a lost broadcast: Doug Ferguson of the AP reported on Sunday evening that NBC will be fulfilling the rest of Fox’s U.S. Open broadcast schedule over the coming years. I’m bummed. The newness of the broadcast at Chambers Bay in 2015 came as a shock to the system for many golf fans used to things being just so, but the network had struck a fantastic balance the last couple years of stunning visuals and boundary-pushing tech innovations to deliver a product that felt cinematic and like a big deal. To be sure, NBC does a nice job. But variety is healthy, and it’s unfortunate to see this deal end when Fox just seemed to be finding its footing.

We’ll see you next week!

Dylan Dethier is a senior writer for GOLF Magazine/GOLF.com, where he’s told the story of a strange cave in Mexico, a U.S. Open qualifier in Alaska and plenty in between. Dethier joined GOLF in 2017 after two years scuffling on the mini-tours. He is a Williamstown, Mass., native and a 2014 graduate of Williams College, where he majored in English. Dethier is the author of 18 in America, which details the year he spent as an 18-year-old living from his car and playing a round of golf in every state.

Montrezl Harrell: Why He Joined the Lakers | Los Angeles Lakers