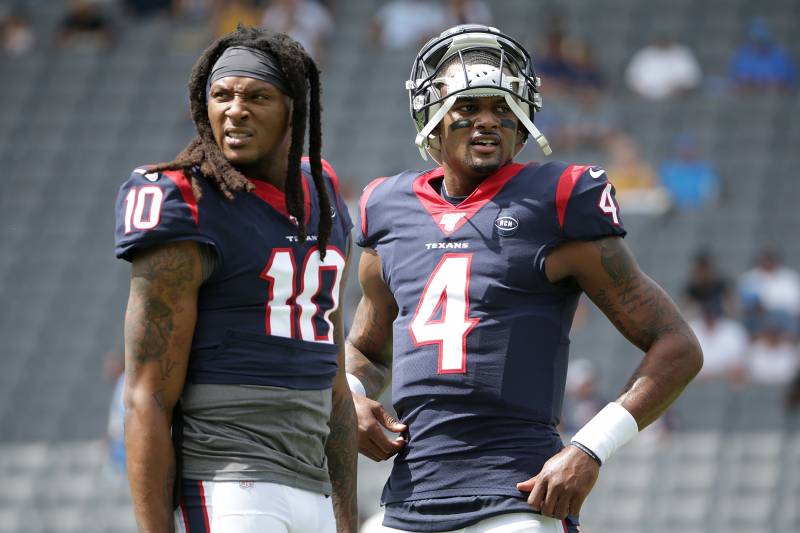 And rightly so. Houston parted with one of the NFL’s best players, in his prime, for a perceived albatross at a devalued position. On the surface, the deal was football robbery.

But many of us felt the same way when the Dallas Cowboys gave up a first-round pick for Amari Cooper in 2018, or when the Oakland Raiders acquired Antonio Brown for the low price of just two middle-round draft picks the following year.

It looks like the majority’s initial assessment was wrong in both cases.

The reality is none of us can guarantee this trade will hinder the Texans or benefit the Arizona Cardinals. 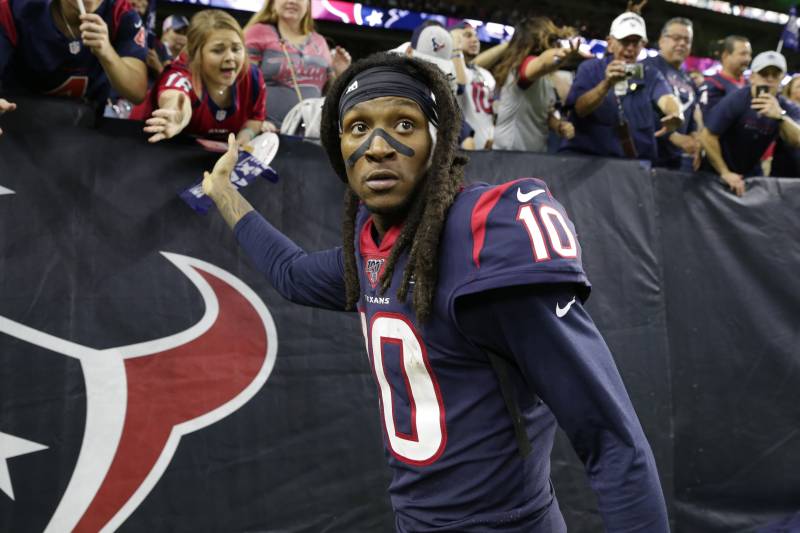 By many indications, a looming contract dispute and potential friction with brass played a role in Houston’s decision to jettison the 27-year-old Hopkins, but that won’t make Texans fans feel any better if the four-time Pro Bowler continues to excel in Arizona while the Houston offense stagnates even a little.

For the Texans to miraculously come out of this looking like winners, the offense will have to somehow keep improving, and 24-year-old franchise quarterback Deshaun Watson will have to at least remain on a sky-high trajectory.

The Texans have made progress in yards per play and DVOA (defense-adjusted value over average at Football Outsiders) in each of Watson’s first three seasons, and you can’t be faulted for believing that’ll be curbed sans Hopkins in 2020.

But what if it isn’t? Is there any way Watson and the Houston offense could benefit from Hopkins’ departure? 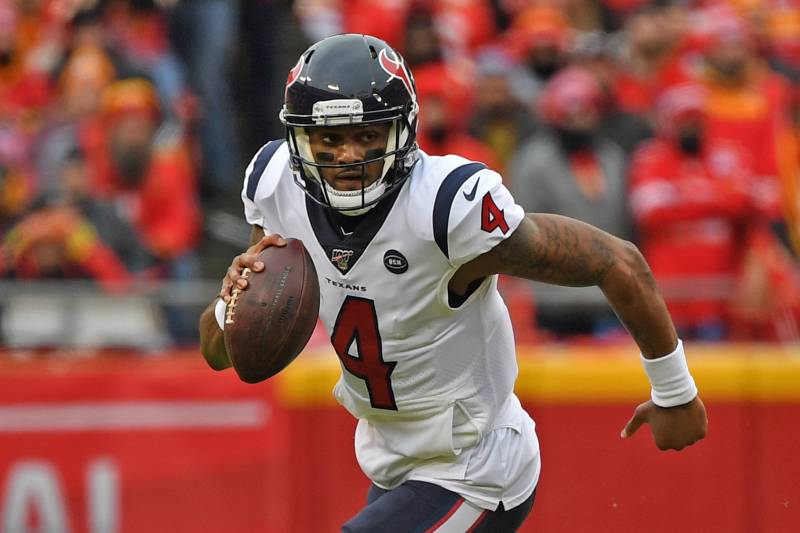 There’s one case study worth considering.

In Calvin Johnson’s final season with the Detroit Lions, 2015, the offense averaged 5.4 yards per play, while the passing game ranked 15th in terms of DVOA. But in their first season after Johnson’s sudden retirement, they averaged 5.5 yards per play, their passing DVOA ranking improved to 13th and they made the playoffs for just the third time this century.

That year, Detroit quarterback Matthew Stafford’s rate-based statistics did not decline dramatically. His interception rate dropped by half a percentage point, his yards-per-attempt average rose slightly and his QBR shot up from 58.5 to a career-best 66.5.

Those numbers held true, and in some cases continued to improve, in 2017, when the Lions offense ranked higher in terms of points per game than it had since 2011.

Johnson was a superstar, but the Lions might have benefited from his absence. What happened?

During the first seven seasons of Stafford’s career, Johnson was the second-most-targeted receiver in the NFL. And in the final four seasons of Johnson’s career, he was targeted an NFL-high 10.8 times per game. During that entire period, the Lions won zero playoff games. And over that second stretch (during which Johnson was a first-team All-Pro twice and a Pro Bowler four times), 17 teams averaged more points per game than Detroit. 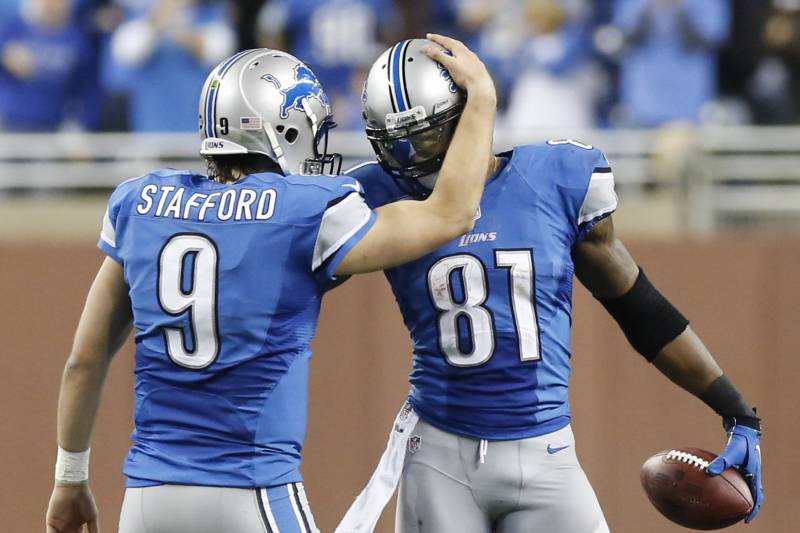 From 2012 to 2015, when Johnson was targeted 10.8 times per game, Golden Tate was targeted 8.5 times per contest, and Reggie Bush was the only other qualified Lions “receiver” during that period with a target average above 5.0 (5.4).

The Lions were quite simply doing a better job of spreading the ball around. Stafford either benefited from the fact that he no longer felt pressured to lean on Johnson or that he lost a feeling of invincibility with him in the game. It was probably a bit of both, but it’s worth noting that while 2.2 percent of his career passes to Tate, Jones, Nate Burleson and Kenny Golladay were intercepted, that rate shot up to 3.4 percent on throws to Megatron.

“I think it was good Calvin retired because it allowed Stafford to learn and grow,” former cornerback Charles Tillman said in 2017, according to MLive.com’s Kyle Meinke. “Obviously, with Calvin—hell, if I was a quarterback, I would just lob it to him every single time too. But I think having Calvin retire, it allowed him to really go through every single read like he was doing in college.”

Can we apply that to the situation in Houston?

Since Watson came into the league in 2017, Hopkins has been the NFL’s most-targeted receiver. And while, as noted, the Texans have made offensive progress, they’re still yet to crack the top 10 in scoring or yardage. There’s room for improvement.

That could come as a result of more variation in the passing game. Unsurprisingly, James Palmer of NFL.com reports the plan is to “spread the wealth.” And that makes a lot of sense for a team that is no longer committed to Hopkins but has acquired a hell of a lot more depth in the pass-catching corps.

The Texans now have three established veterans in Brandin Cooks (acquired in a trade with the Los Angeles Rams), Randall Cobb (signed as a free agent), Will Fuller V (returning from a core muscle injury after compiling 670 yards in just 11 games last season) and Kenny Stills (who caught more than 70 percent of the passes Watson threw his way in 2019), plus David Johnson (he’s at least a good receiver), Duke Johnson (another good pass-catching back) and a deep group of tight ends. 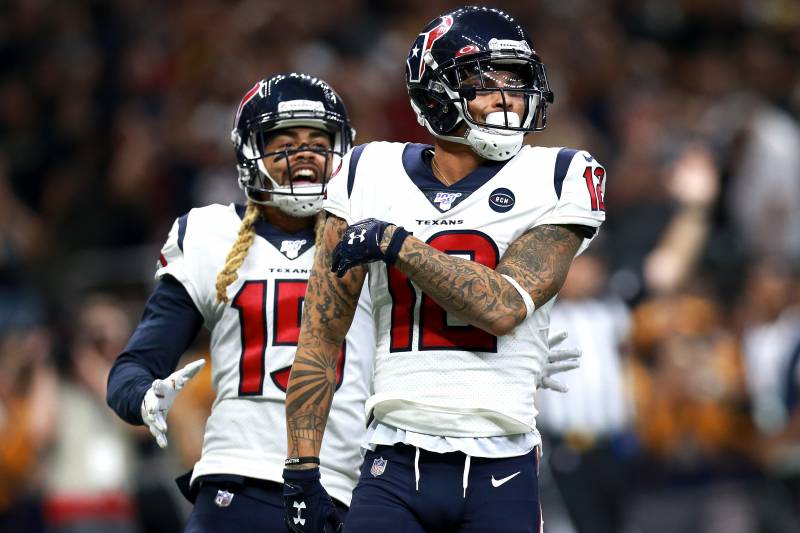 “We’ve got a great quarterback, a guy who’s going to be able to distribute the ball and again get the ball to the guys that are winning, and we’ve got guys who have won consistently for a long time scattered throughout that room,” offensive coordinator Tim Kelly told Palmer. “You look at Brandin, you look at Randall, you look at Will and Kenny, obviously, with the production they had last year.”

It’s possible the loss of Hopkins will force Watson to throw away a crutch, just as Stafford did in 2016 and—as Yahoo Sports’ Frank Schwab pointed out in looking at that phenomenon—just as Brett Favre did when he lost Sterling Sharpe in 1994.

But sometimes, a loss is just a loss. Watson was intercepted on just 1.8 percent of his throws intended for Hopkins, and his passer rating on those attempts was 109.5, which probably indicates Hopkins had a much more positive net impact on his quarterback than Calvin Johnson did on his.

Losing Johnson didn’t kill Stafford, losing Sharpe didn’t derail Favre’s career and Cam Newton won an MVP two years after losing Steve Smith in Carolina. But on the other hand, Daunte Culpepper was never the same after losing Randy Moss from Minnesota after 2004.

Both scenarios are possible, which is why the devil’s advocate’s take deserves attention in the midst of all the jeers.