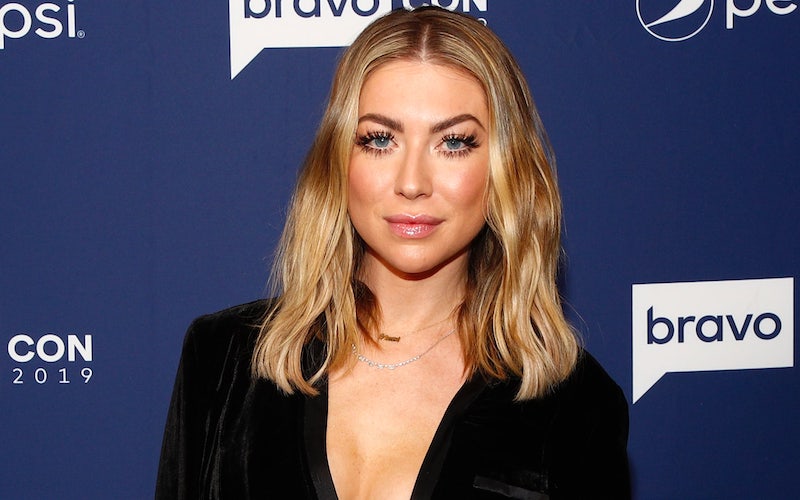 All the firings are the direct result of those cast members posting racist or insensitive comments, or behaving in racist ways.

In a brief statement, Bravo said, “Bravo and Evolution Media confirmed today that Stassi Schroeder, Kristen Doute, Max Boyens and Brett Caprioni will not be returning to Vanderpump Rules.”

Former Vanderpump Rules cast member Faith Stowers said last week that Doute and Schroeder reported her to police after seeing a news report with a photo of a black woman who does not actually resemble Faith. “I guess this woman was robbing people. And they called the cops and said it was me. This is like, a true story. I heard this from actually Stassi during an interview,” Faith said.

Stassi, who’s one of Bravo’s biggest stars, started her reality TV career on The Amazing Race season 8, the family edition season, and went on to many other Bravo appearances, including as a central cast member on Vanderpump Rules. Last year, Bravo gave her a digital series, Basically Stassi.

Stassi posted to Instagram Monday, apologizing to Faith. Stassi’s agents and manager dropped her as a client yesterday, and Variety reported today that:

“In the wake of Stowers’ account going viral, both Schroeder and Doute apologized. But during the nation’s recent reckoning on systemic racism and police brutality, originally reignited by the death of George Floyd — which has led to uprisings in the streets, in newsrooms, and on social media — Bravo decided that time was up for the two longtime ‘Vanderpump Rules’ co-stars. (And for Boyens and Caprioni as well, who were new this season, and largely despised.)”

One of those “largely despised” cast members, Max Boyens, who’s the manager of TomTom, repeatedly used the n-word on social media, tweeted about wanting to be violent toward Asian people, and also wrote that he was upset he couldn’t use the n-word “because quite honestly it’s my favorite word.”

In a statement to Us Weekly, he said,

“I want to sincerely apologize for what I tweeted in 2012 — it was wrong on every level. It is not a representation of who I am. I am shocked I ever tweeted that — and I am disgusted and embarrassed. I am truly sorry.”

Caproni repeatedly and casually used the n-word in tweets from the early 2010s. He apologized on Instagram:

“I want to express my deepest apologies for the insensitive, ignorant, and hurtful comments I made. I am incredibly ashamed and accept full responsibility, and acknowledge that this language was as unacceptable then as it is now. Please know that I have learned and grown since then and would never use this language today. From the bottom of my heart, I am truly sorry.”

Fans of both Vanderpump Rules and The Challenge are now calling out other cast members for their past behavior, and demanding that networks act similarly.

For example, in a 2017 tweet, Jax Taylor also accused Bowers, without evidence, of committing crimes, the New York Post reported.

Dee Nguyen fired from The Challenge

Dee Nguyen came to The Challenge as it started to bring in cast members from other reality TV shows, including in the US, UK, and elsewhere. She was a star of the UK’s Geordie Shore, which is roughly comparable to Jersey Shore.

She’s competed on three seasons, and was one of the four winners of The Challenge: War of the Worlds 2.

Over the weekend, Dee posted several times on social media. A Reddit megathread has gathered all of her posts together, including one where she was criticized for just posting a black square to Instagram last Tuesday, to which she responded, “people die every fucking day,” an apparent reference to George Floyd being killed by a Minneapolis police officer.

Early this morning, Dee apologized, addressing “my colleagues to whom I have hurt directly and indirectly due to my insensitive remarks” and writing, in part, “I believe in this movement and I’m stepping away from social media to focus on my wellbeing and mental health.”

“As a result of Dee Nguyen’s offensive comments on the Black Lives Matter movement, we have severed ties with her. Out of respect for our Challengers, we’ll air our season as planned. We strongly condemn systemic racism and stand with those raising their voices against injustice.”

A follow-up tweet linked to the Anti-racism resources for white people document, and said “We stand united against racism and urge you to join us in taking action to end racism, discrimination, and systemic violence.”

Dax Shepard reveals he relapsed after 16 years of sobriety