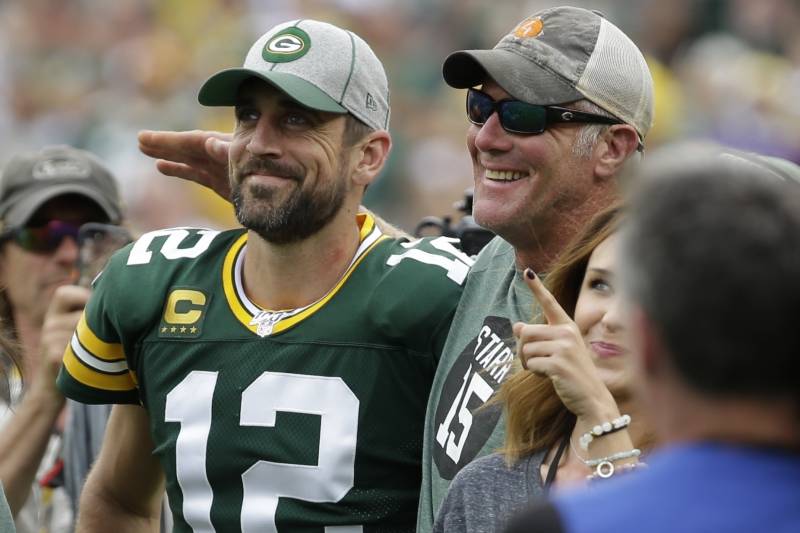 “I think he will play somewhere else,” the Hall of Fame quarterback said of Green Bay Packers quarterback Aaron Rodgers during an appearance with The Rich Eisen Show on Wednesday:

“I guarantee you (the Love pick) got the gears going in Aaron’s mind. All (Rodgers) needed was a reason (to play elsewhere).”

The Packers traded up from the 30th overall pick to the 26th overall pick in order to select former Utah State quarterback Jordan Love during the first round of the 2020 NFL draft Thursday night.

It was the first time Green Bay had taken a skill position player in the first round since Rodgers, who became Favre’s backup:

“I was very surprised,” Favre told Eisen (h/t Packers Wire’s Zach Kruse). “I thought they’d go in the direction of an offensive weapon. … Nothing against Jordan Love. But you trade up to get more of a project. He can’t help you get to the Super Bowl immediately.”

Favre to @richeisen: “They don’t draft any weapons that can help immediately, to my knowledge. That sends a disrespect message to Aaron Rodgers. He has every right to be disappointed, if he is.”

Brett Favre told @richeisen that he talked with Aaron Rodgers, who was “let’s just say surprised” that Packers went with Jordan Love in the first round.

More from Favre: “I think they burned a bridge that will be hard to overcome. At some point, it will rear its ugly head.”

Once the Packers drafted Rodgers in 2005, Favre remained their starting quarterback for three more seasons before he moved on to the New York Jets (2008) and Minnesota Vikings (2009-10). However, the discord between mentor and mentee was clear:

“I love Brett, I always had a great appreciation for him but we were caught in the middle of a power struggle” – @AaronRodgers12 on his relationship with Brett Favre #PatMcAfeeShowLIVE on @DAZN_USA https://t.co/pJsupWoQte

“I was able to talk with [Rodgers] earlier,” Love told ESPN’s Maria Taylor on Friday. “You know, really good guy. [He was] just congratulating me, and I was just letting him know that I was excited to be able to work with him.”

Rodgers was expected to reach out to whomever the Packers used their first-round pick on, even if he didn’t expect it to be his heir apparent:

Aaron Rodgers on @PatMcAfeeShow: “We haven’t picked a skill player in the first round in 15 years, so that would be kind of cool.”

Rodgers says whoever the pick is, he’ll track down his phone number and welcome him to the team tonight — if the Packers don’t trade out.

Rodgers is under contract through 2023. Despite having a two-time league MVP under center, Green Bay has not made it to the Super Bowl since winning it in 2010—the franchise’s second championship during Favre’s and Rodgers’ tenures.

The Packers have long garnered scrutiny for not building an adequate supporting cast around Rodgers. That was apparent last season when No. 1 receiver Davante Adams missed four games with turf toe, though running back Aaron Jones emerged to give Green Bay a strong 1,000-yard ground presence that has often lacked in the Rodgers era.

The 2020 wide receiver draft class was lauded as one of the deepest, further earning Packers brass criticism for not surrounding Rodgers with more talent.

Green Bay selected Boston College running back AJ Dillon in the second round (No. 62 overall) and Cincinnati tight end Josiah Deguara in the third round (No. 94) after snagging Love in the first.