TOKYO  — Shares were mixed in Asia on Tuesday after the Nasdaq composite touched a fresh record as enthusiasm about reopening the economy pushed Wall Street still higher. 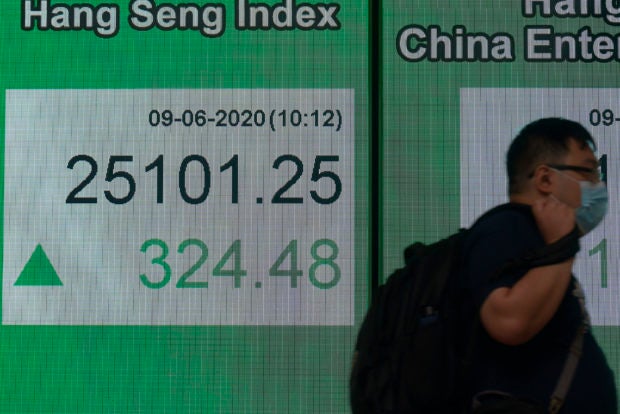 Shares rose in Taiwan and Singapore.

In Japan, the government reported that wages fell in April as the country widened precautions to fight the coronavirus pandemic, causing some businesses to close or limit their operations.

Lower incomes make consumers even less likely to spend, compounding difficulties in boosting demand at a time when the economy is in recession. Failure to get companies to raise real wages has hindered efforts to restore the economy to solid, sustainable growth.

Markets are powering ahead, helped by massive injections of stimulus by world central banks, hefty government spending, and hopes that “Peak COVID” has come and gone, despite a continued global rise in infections, Hayaki Narita of Mizuho Bank said in a commentary.

“The durability of such a rally requires one of two things. For the music not to stop or for the real economy to catch up. The latter needs time, so the burden is now on the former,” Narita said.

On Wall Street, the broader S&P 500 was up slightly for the year and back within 4.5% of its own record as optimism grows that the worst of the recession may have already passed.

Stocks that would benefit most from an economy that’s growing again rose the most, including smaller companies, airlines and oil producers.

The Nasdaq composite, which is more heavily weighted to the big technology stocks that held up the best earlier this year, gained 1.1%, to 9,924.74. The Russell 2000 index of small-cap stocks rose 2%.

Stocks have been rising since late March, at first on relief after the Federal Reserve and Capitol Hill pledged to support the economy and more recently on hopes that the recovery may happen more quickly than forecast.

Those hopes got a huge boost Friday when the U.S. government said that employers added 2.5 million jobs to their payrolls last month. Economists were expecting to see 8 million more lost.

States across the country are slowly relaxing restrictions on businesses meant to slow the spread of the coronavirus outbreak, which is raising expectations that the economy can pull out of its coma. New York City, which has been the country’s hardest-hit, began allowing retailers and some other businesses to reopen on Monday with some restrictions.

That puts more scrutiny on economic reports this week as investors look for confirmation that Friday’s jobs report was a true inflection point and not just an aberration.

Even if the economy did hit its bottom a month or two ago, economists warn that many risks are still looming over a very long road back to full recovery. Critics are also still saying the stock market may have risen too quickly and may be setting investors up for disappointment, with the biggest risk being another wave of infections that leads to more lockdowns.

Among this week’s economic highlights are reports on inflation and the number of workers applying for jobless benefits. The headliner, though, is likely the Federal Reserve’s meeting on interest rates in the middle of the week.

Treasury yields have been climbing in recent days, reflecting rising expectations in the market for the economy and inflation.

Don’t miss out on the latest news and information.

American Accelerates Fleet Simplification – What Does This Mean?