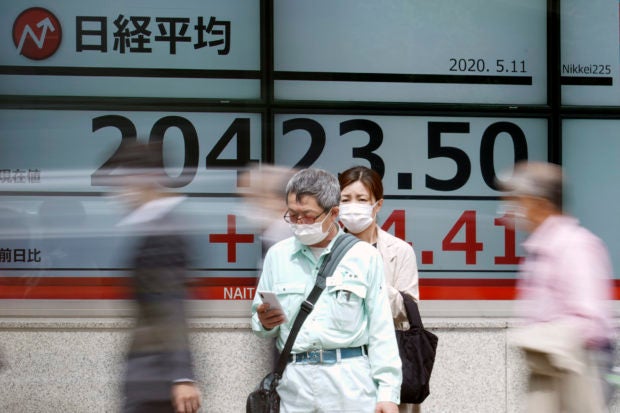 A man wearing a face mask to help curb the spread of the coronavirus stands as others walk past an electronic stock board showing Japan’s Nikkei 225 index at a securities firm in Tokyo Monday, May 11, 2020. Shares advanced Monday, June 8, 2020 in Asia, buoyed by surprisingly strong U.S. jobs figures that helped power a surge on Wall Street on Friday. (AP Photo/Eugene Hoshiko)

Crude oil prices rose after major oil producing nations agreed to extend a production cut of nearly 10 million barrels of oil a day through the end of July to counter the blow to demand from the coronavirus pandemic.

U.S. crude for July delivery added 27 cents to $39.82 per barrel in electronic trading on the New York Mercantile Exchange. Brent crude, the international standard, gained 54 cents to $42.84 per barrel.

d the economy contracted at a 2.2% annual rate in the January-March quarter, better than the initially estimated minus 3.4%.
Private sector spending was better than earlier reported, the Cabinet Office said. However, the first quarter came before Japan felt the full impact of partial shutdowns at home due to a nationwide state of emergency that has since been lifted.

Australia’s markets were closed for a holiday.

Shares rallied on Wall Street on Friday, with the S&P 500 gaining another 2.6% to 3,193.93, its eighth gain in 10 trading sessions, after a report said more American jobs were added than expected in May.

That raised hopes that the worst of the recession may have already passed. But economists cautioned that many risks still loom on the long road to a full recovery.

“Amid the recent wave of May data releases, however, one should nevertheless be cautioned against reading too much into any single month-on-month change, particularly during such times of uncertainty,” Jingyi Pan of IG said in a commentary.

Employers added 2.5 million workers to their payrolls, when economists were expecting them instead to slash another 8 million jobs.

That news gave investors some welcome validation for the S&P 500’s rally of more than 40% since late March.

The U.S. benchmark is now down just 5.7% from its record set in February after plunging nearly 34% earlier this year when recession worries were peaking.

The yield on the 10-year Treasury rose to 0.90% on Monday from 0.88% late Friday. Moving largely in tandem with expectations for economic growth and inflation, it is seen as a harbinger of risk and has shown much more caution than stocks recently.

Promises of immense aid from Congress and the Federal Reserve have helped convince investors that the worst-case scenario of a major financial crisis is unlikely, touching off the rally that began in late March.

More recently, buying has been driven by hopes that economies will swiftly recover from the worst downturn in decades as governments relax lockdowns.

Analysts and economists warn a full recovery for the U.S. economy is still far ahead, with the unemployment rate above 13%, nearly quadruple where it was at the start of the year, and on par with its level during the the Great Depression.

The biggest uncertainty is whether major virus outbreaks will return, leading to further shutdowns.

And after an initial burst of hiring as businesses reopen, the recovery could slow in the fall or early next year unless most Americans grow confident they can safely shop, travel, eat out and fully return to their other spending habits, economists say.

Tensions between the United States and China are also raising worries the world’s two largest economies might resume their trade war.

Some investors are also worried about volatility that could be created by this fall’s U.S. elections.

Ahead of the weekend video conferencing meeting of OPEC and other major oil producers, benchmark U.S. crude oil for July delivery rose $2.14 to settle at $39.55 a barrel Friday. Brent crude oil rose $2.31 to $42.30 a barrel. In April, it plunged to near $20 a barrel as the pandemic clobbered demand.

OPEC and its allies chose to extend their production cut of about 10% of global output through the end of July to curb excess production that has been depressing prices as global aviation remains largely grounded due to the pandemic.

OPEC has 13 member states and is largely dominated by oil-rich Saudi Arabia. The additional countries involved part in the so-called OPEC Plus accord have been led by Russia, with Mexico under President Andrés Manuel López Obrador playing a considerable role at the last minute in the initial agreement.

Don’t miss out on the latest news and information.