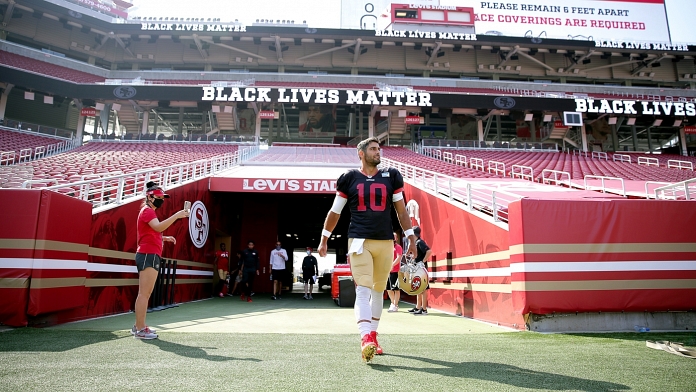 Pro Football Focus ranks Mullens as its No. 6 backup QB

Pro Football Focus ranked Nick Mullens No. 6 among its list of the top backup quarterback in the NFL. He came behind Jameis Winston of the New Orleans Saints, Marcus Mariota of the Las Vegas Raiders, Andy Dalton of the Dallas Cowboys, Mitch Trubisky of the Chicago Bears, and Matt Schaub of the Atlanta Falcons.

The 49ers didn’t use fake crowd noise during their Friday practice inside Levi’s Stadium because the team doesn’t yet know what the league’s rules will be when it comes to its use on game days.

Head coach Kyle Shanahan has already expressed his concerns with pumping the sounds through the stadium’s sound system.

“Right now, I’m hearing you’ve got to press play on the noise at the beginning of the game, and you can’t turn it off till the end of the game,” Shanahan said on Thursday. “So, that means we’re helping both D-Lines when we’re at home. There’s lots of stuff that I really don’t know about yet.”

Shanahan added during a Friday-morning interview on KNBR that the use of fake crowd noise may be a game-to-game decision. For now, the 49ers’ Week 1 contest against the Arizona Cardinals is the only game that for sure won’t have fans in attendance. Levi’s Stadium won’t host another game after that until October 4.

“Until I get the official rules, I’m not going to go out and test stuff until I know what I’m testing,” Shanahan said on KNBR.

Quarterback Jimmy Garoppolo spoke with reporters via Zoom on Friday while wearing a “Feels great, baby” face mask. It’s an actual product that is being sold, with proceeds going to a good cause.

“Just thought it was appropriate, get the ‘Feels great, baby’ out there,” Garoppolo said. “We teamed up with this non-profit organization, CityTeam. All the proceeds will go to them, helping families in the Bay Area, just during the pandemic, the quarantine, with coronavirus and all that stuff. It’s for a good cause, so go get your masks, everyone.”

#49ers QB Jimmy Garoppolo with his trademark phrase on his mask today. Garoppolo said the masks are available for sale and all proceeds go to help Bay Area families in need during the pandemic… pic.twitter.com/oyGQM8GTSX

You can purchase yours here: jimmygmasks.com

Black Lives Matter on the big screen during practice

The 49ers showed their support for “Black Lives Matter” with several displays around Levi’s Stadium, including the big screen. 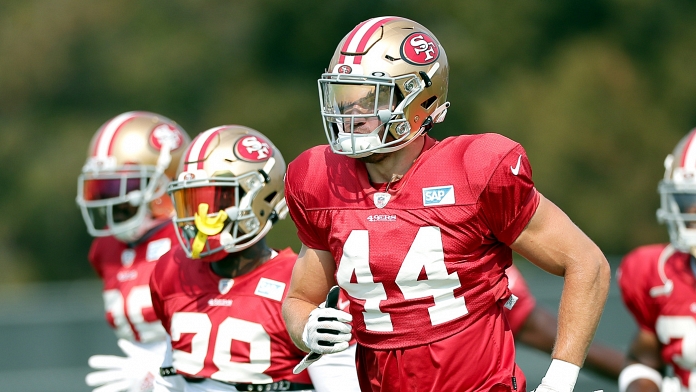 The 49ers worked out or plan to work out five players, according to Aaron Wilson of the Houston Chronicle. They are offensive linemen Jamon Brown, Ted Larsen, Dakoda Shepley, and Isaiah Williams, along with tight end MarQueis Gray. 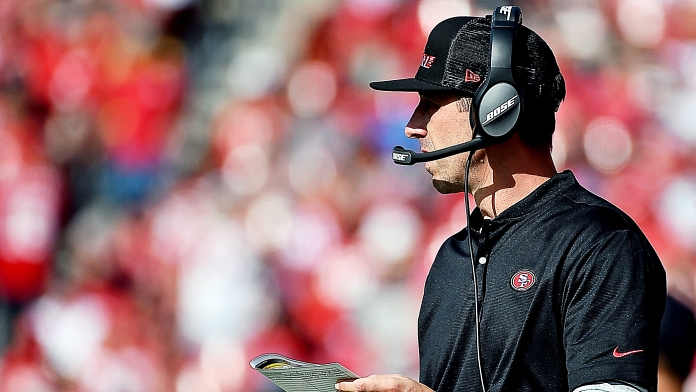 Head coach Kyle Shanahan has always been pretty open with the media while discussing injuries or personnel. That’s about to change — for one year, at least.

With no preseason games, Shanahan isn’t as willing to offer up intel that opposing coaches would otherwise be able to learn simply from watching film.

“This year is a little bit different when talking about who we’re playing at what position and where and why because there is no preseason,” Shanahan told reporters. “No one gets any tape. We’re not going to see anything on Arizona until we get out there on the first play in the first quarter and the same thing with 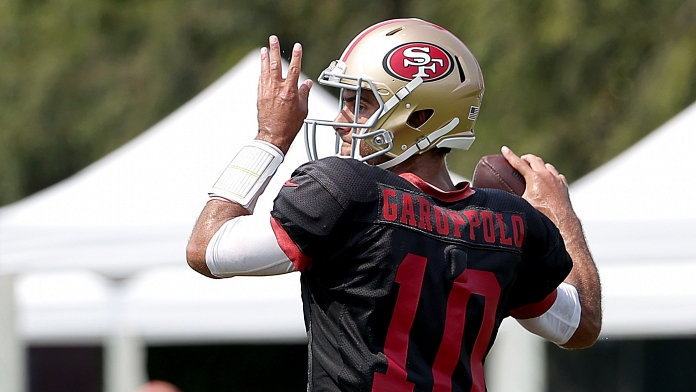 Quarterback Jimmy Garoppolo’s knee brace has prompted a lot of discussion among local reporters. He wore it on his left leg all last season after returning from an ACL injury suffered the year before. It was noticeably absent during training camp walk-throughs.

Then, when practices started on Saturday, Garoppolo was once again wearing the protective device.